Restoration of a watchmaking heritage

The funds generated by the MIH Gaïa timepiece will primarily enable the museum to examine and restore a number of iconic artefacts, and also to index, categorise and itemise the records associated with them. When restoring antiques, extensive investigations need to be made to identify them: the date they were made, renovation history, provenance, etc. After this comes the actual work on the piece: disassembly, cleaning, repairs, checks, adjustments, and reassembly. Due to the demands of restoration, it is also necessary to partner with experts (specialist craftsmen, archivists and researchers from outside the museum). Restoration projects therefore take several months and require major investment. Two of the MIH’s iconic pieces produced in Neuchâtel most urgently in need of restoration are the Grand Magicien and the Tellurium. 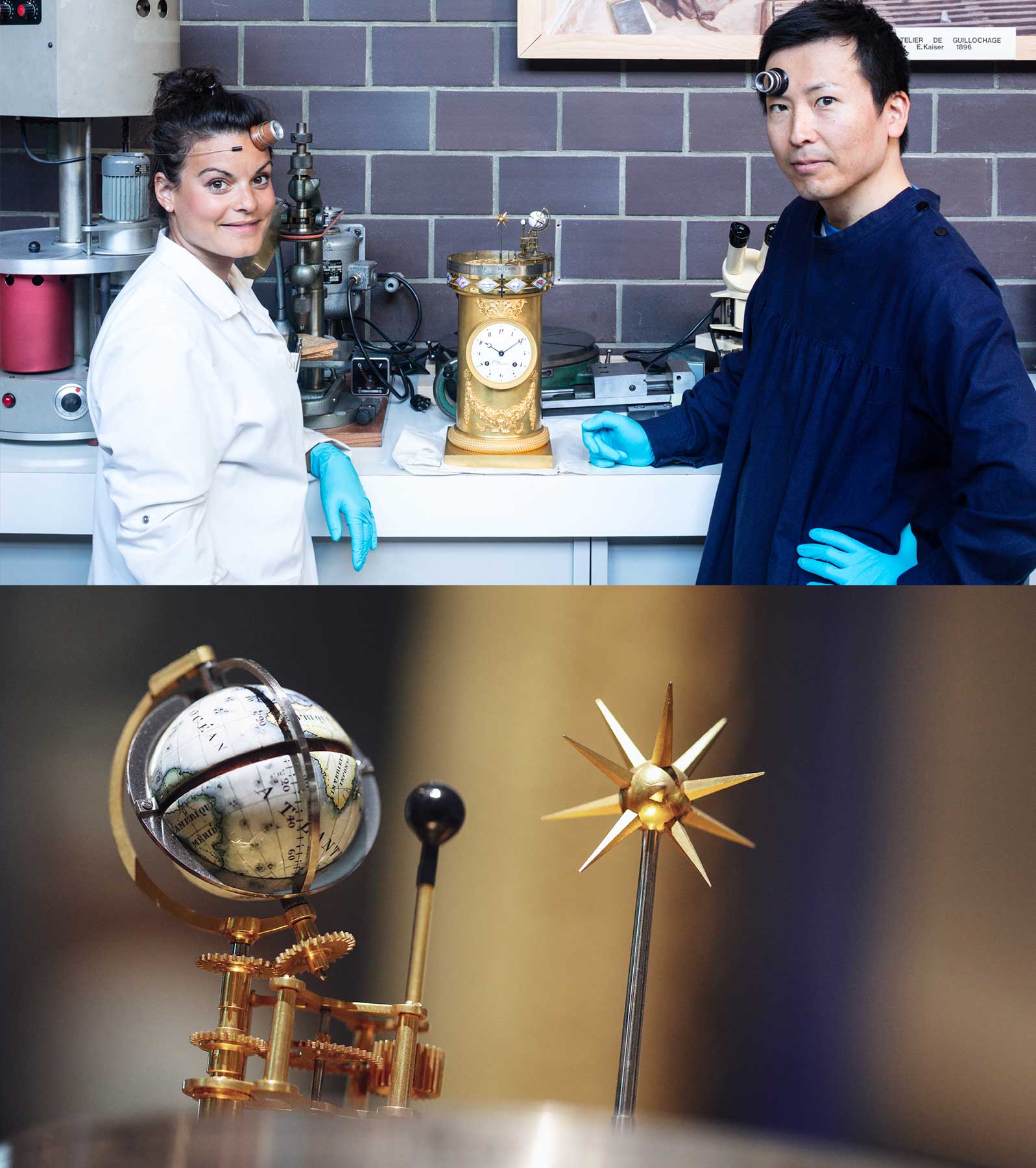 The Maillardet family created the Grand Magicien around 1830. It is a clock with an automaton on the top, in the form of a magician. The automaton holds a wand and wears the traditional clothing of a soothsayer – a pointed hat and a sweeping ceremonial robe. He is seated at a table on which the tools of his trade can be seen: a book of prophecies, an incense burner and a telescope. When a visitor comes in search of sage advice, they may ask him a question in Spanish by inserting an oval plate into a drawer. After taking a few moments to reflect, the learned man stirs, stands up, directs his gaze to the assembled company, and then, following a series of exaggerated gesticulations, waves his wand towards an oval window above his head.

The two shutters open, and the answer appears. And then, with his task complete, the magician can return to his seat. While all of this is happening, two tulips unfurl and then close at the corners of the stage.

Below are some of the questions and answers:
“What is the food of the soul?
– Truth and justice.
What is the most useful thing to save?
– Time.
What is the noblest value of science?
– To illustrate ignorance.
How should we consider morality?
– As the health of the soul.”

The main elements of the mechanism are located in the base. Two springs, housed in a barrel, supply the driving force. A dual wheel maintains the regularity of movement. Cams and levers control the motion of the automaton. The base also has space for the movement of a pendulum, with the clock face displaying the time in Roman numerals in the centre of its façade.

The Tellurium by François Ducommun is a rare piece from the early 19th century in which the astronomical mechanism represents the Earth and the Moon revolving around the Sun. The Tellurium has never been restored. It requires a good understanding of cosmology, astronomy, and, of course, horology.
The casing is made of gilt bronze and is cylindrical in shape, adorned with garlands of roses, leaves and ribbons. It sits on a square base with concave corners. An oval roundel, painted on enamel and representing an allegory of Astronomy, appears below the white enamel dial with Roman numerals and “Breguet” hands. The same roundel appears on the reverse. On top of the casing is the orrery, consisting of the Moon, Earth and Sun, and a silver band bearing the following astronomical indications: calendar days, months, leap years, age and moon phases. The signs of the zodiac are represented within roundels painted on enamel. The clock’s movement has a recoil anchor escapement and a chime for hours and quarter hours.